Hinge, the dating app that promised a better set of prospects by suggesting matches who share Facebook friends, is about to radically change its course: it’s ditching its requirement that users log in with Facebook. The change will go into effect on Monday, June 5th on Android, followed by a June 12th release on iOS.

While the option to use Facebook won’t be fully removed, users will instead be able to choose to authenticate using their phone number, the company says.

The decision was prompted by ongoing requests from users who have asked for a non-Facebook login option, Hinge founder and CEO Justin McLeod says. This is especially important to the company as people “move away from Facebook and onto other platforms,” he notes.

This may refer to younger users’ preference for different social platforms, as reflected by a Pew Internet survey released this week, which found that teens are dumping Facebook proper for YouTube, Snapchat and (Facebook-owed) Instagram.

But Hinge isn’t the first dating app to go this route. Bumble also recently said it was removing the Facebook requirement, in response to user feedback. 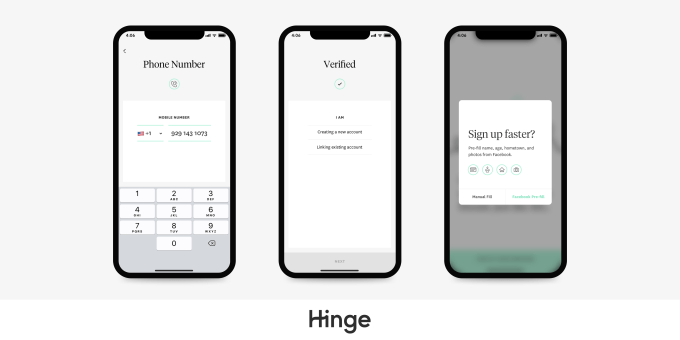 In Hinge’s case, however, the decision changes the dating app’s fundamental value proposition, which was focused on matching singles with people they were already connected to by way of Facebook friends, up to three degrees away. The premise was that this would make online dating feel less creepy. And, because you shared mutual friends, you’d be less concerned that the person was a total nut.

This also helped Hinge stand out in a space that’s dominated by Tinder, which could often seem random and filled with those not in search of “real relationships,” let’s say. 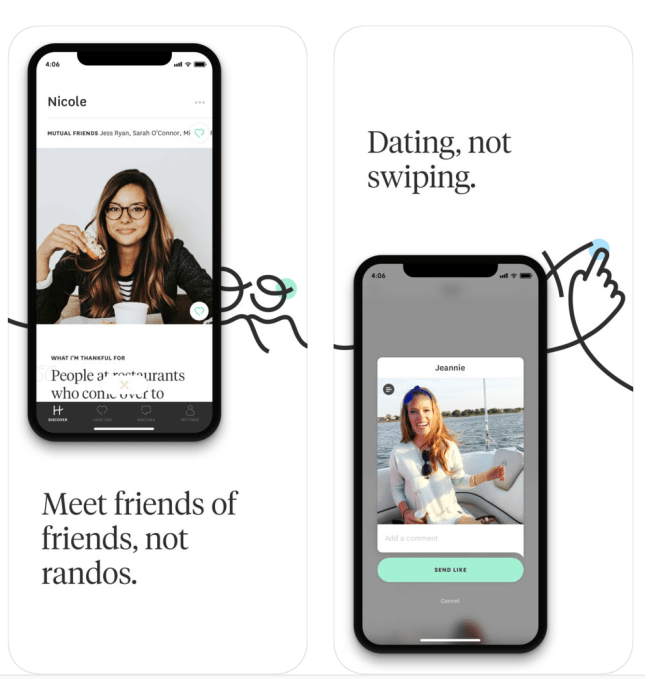 Over the years, Hinge doubled down on this brand position with call-outs like “meet friends of friends, not randos” in its marketing materials.

Its user profiles, meanwhile, focus less on users’ looks – unlike the Hot or Not-ish Tinder. Instead, users answer getting-to-know-you questions and share fun, personality-revealing facts on their profile, along with photos and videos. But the goal is to present not just the person’s face or body, but their goals, interests, and way they view the world.

Hinge had also experimented with features that make online dating less frustrating, ranging from anti-ghosting reduction features to an app that allows your friends to take over for you. (This has since shut down.)

It’s unclear how well these moves have paid off for Hinge in the long run, as the company won’t share user numbers. It will only say the active member base has doubled since the beginning of the year. However, Sensor Tower estimates Hinge has more than 3 million worldwide downloads across both iOS and Android, 94 percent of which are in the U.S.

The removal of the Facebook requirement, not at all coincidentally, comes at an interesting time for dating app businesses in general, who have just learned Facebook now aims to compete with them directly.

In May, Facebook announced a new dating feature that would allow people to meet non-friends. Hinge took notice, as did others.

“It’s interesting to see a company facing so many privacy concerns enter one of the most intimate spaces in tech today,” McLeod says of Facebook’s dating plans. “We’re flattered they chose to copy our designs, but ultimately we’re not worried about them as a competitor – our members are increasingly moving away from Facebook as a platform.”

After filling in the profile, users can disconnect from Facebook without losing the imported information, Hinge notes.

Hinge doesn’t believe the move away from Facebook as the underlying network will have an ill effect. Because of its robust profiles which allow for the liking of individual pieces of content, it thinks its machine learning algorithms have advanced to the point where they can surpass “friends of friends”as a predictor of compatibility, the CEO says.

“Friends of friends is a symbol for what Hinge truly stands for: humanizing modern dating and fighting against the culture of shallow swiping,” says McLeod. “As the Hinge community continues to grow and evolve, we’re not relying on a single feature to best match our members; instead we’ll remain at the forefront of product development and double down on giving our members’ the best offline experience,” he adds.

It’s not hard to get on board with Hinge’s overall vision, but its app is still dwarfed by Tinder, which is now estimated to have over 50 million users. Rival Bumble is growing as well, with some 22 million+ users. And since dating is ultimately a numbers game, Hinge needs the no-Facebook-needed policy to really boost its own.