The woman who attacked YouTube’s headquarters in San Bruno yesterday may have been acting out of anger over the site’s content policies. “At this point in the investigation it is believed that the suspect was upset with the policies and practices of YouTube . This appears to be the motive for this incident,” said San Bruno Police Chief Ed Barberini at a press conference Wednesday morning.

The police identified Nasim Najafi Aghdam, a San Diego resident, as the shooter; police said they believed she acted alone. Her family reported her missing on March 31.

Aghdam was a frequent and outspoken user of YouTube and had posted dozens of videos on various topics and in several languages. Her personal website and videos make it clear she believed the company deliberately limited the reach of some users, including herself.

She also had videos on other sites, including one called “Discrimination Filteration On Youtube” (sic) on vid.me, and the site includes images of her YouTube dashboard showing declines in views over the course of 2016. 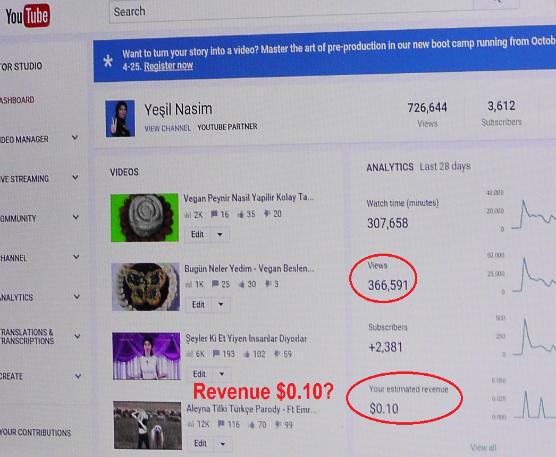 Specifically she appears to have been concerned that she was being discriminated against for her veganism, a practice about which she felt very strongly, not on the basis of (for example) her race, gender, or other traits. She asserted that one video had been age restricted by an anti-vegan YouTube employee, and that subsequently the company “began filtering my videos to reduce views & revenue to suppress me!”

How this frustration with YouTube’s policies grew into the choice to commit yesterday’s attack is not clear and police did not speculate; the investigation is just starting.

The police did say, however, that they had had some kind of contact with Aghdam earlier that day, though they did not mention what that was.

She reportedly accessed the YouTube building through the parking garage, from which she entered the courtyard and began firing indiscriminately. She struck 3 people before turning the firearm, a licensed and registered 9mm handgun, on herself.

“At this point we have no indication that she was selecting individuals to fire on,” Barberini said. “There’s absolutely no link or relationship that we’ve identified between our suspect and anybody who was at the scene at the time of the incident. We know that she was upset with YouTube; whether that rises to the level of terrorism will hopefully be determined in the coming weeks.”

He also praised YouTube and its employees for their quick response:

“YouTube’s response to this critical incident was also extraordinary. They were extremely prepared to offer services to all of their employees in a swift and timely manner. This would have been much more challenging for us without all of their assistance.”

The company had worked with police specifically on policies and measures for dealing with an active shooter. YouTube CEO Susan Wojcicki addressed the shooting in a tweet yesterday.

There are no words to describe how horrible it was to have an active shooter @YouTube today. Our deepest gratitude to law enforcement & first responders for their rapid response. Our hearts go out to all those injured & impacted today. We will come together to heal as a family.